It may not be obvious from the stuff I write about here, but, deep down, I'm a programmer and love to be writing software. Much of this software has been for Google's Android OS - little apps for your mobile or tablet, with quite a lot of development revolving around my listing apps for bird-watchers.

I have also, over the years, created quite a few Windows-based programs to help people manage their websites. Sometimes these are little helper programs, others are a bit more complicated, allowing galleries to be built, or managing simple web sites for example. I have a couple of customers who use such software to manage their online car sales sites in this way today.

A number of years ago, the Isle of Man Government launched a scheme for local businesses to build a web-based retail presence with Venda, one of the big players in managed online retail. They gave a generous grant to get help with setting up a site and a couple of years of free service with the Venda platform to give retailers a good start. I helped a number of businesses with this setup process, which actually was fairly simple if you knew a little about the internet and some basic HTML.

The big problem came at the end of the government-supported 2-year trial period. Venda's fees are not the cheapest on the internet, and at the time were about £50 per month. All of my customers with them felt that this was too much for the amount of business they were doing online and wondered if I could find a cheaper solution.

I was fairly sure that I could come up with something and started to write what would come to be called SimpleShop. It is currently used to manage a set of sites for some of my customers and, for something that is several years old, works quite reliably.


However, it was written using a development kit that is no longer supported. It was easy to work with at the time but now lacks modern features and extensions that are more-or-less essential.

I now use B4J, a powerful BASIC-language IDE that ultimately produces portable JAVA programs that will work on Windows, Mac and Linux PCs. I don't particularly need the portability for my clients, but it is nice to have the facility.

Anyway, SimpleShopX2 is almost finished. It has been rewritten from scratch, using more powerful and versatile programming, with a full SQLite database back-end, to be faster, more efficient and more secure than the existing version. It has taken more than a year, off and on, to produce more than 11,000 lines of code, but that does include many more features and facilities than the earlier version.

Here's a look at the main screen, with some test products on display. I'm still working on bug-hunting and more features, but it's finally almost ready to go! 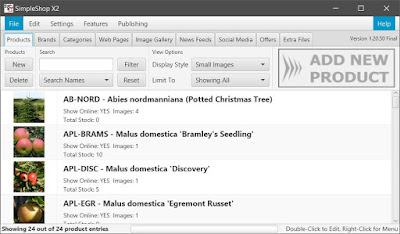 I've also put an early draft of the manual online in PDF format HERE. it gives a good idea of what the program does and describes many of its features.