A Quick Walk Up Lhergy Frissel

As always, we finish at four on a Saturday. I used the hour before picking Dad up from the Pub to try and get some exercise.

Leaving the shop at a couple of minutes to four, I was at the Albert Tower in 28 minutes, having walked along the promenade and over the crossing at Ballure Bridge before climbing Lhergy Frissel. at the top I just spent a few minutes taking in the view and snapping a couple of photos. It was quite breezy, but very pleasant. One day I'll have to take the Quadcopter up there and get a different perspective. 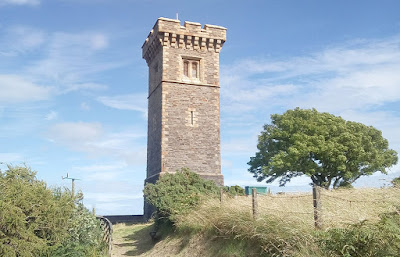 I've photoshopped the masts/lighting posts out on this one - I know we need the coverage for mobile and TV, but they are really intrusive. Trying to disguise them as lighting posts doesn't really work either. At least the other masts along the ridge line were made to look a little tree-like. I don't know why the planners dropped the requirement for the ones at the tower.
Posted by David Kinrade at 11:29 am
Email ThisBlogThis!Share to TwitterShare to FacebookShare to Pinterest

Six full batteries of flying, one minor crash and one forced landing later, here's my first real footage with the Hubsan.

My brother - driving the Claas Jaguar silage chopper - likes watching this sort of thing on YouTube, so, of course, we have to do the same thing for him.

I'm trying to concentrate on the action, but you do get a glimpse of the beautiful Manx scenery in the background.


The first filming session on Thursday was grey, misty and overcast. The footage is a little flat, but there was virtually zero wind and this gave me a chance to try and follow the tractors a bit. The Hubsan really is a bit of a handful, especially when stopping and starting. I'm finding that I have to do a lot in the editing, to cut out the jerky, bumpy bits at the beginning and end of each sequence. It's also, of course, about practice and smoothness. The controller is very sensitive and you actually need a very delicate touch to keep it a bit smoother.

Friday's rain meant that they were still at work chopping and carting on Saturday morning. By the time I arrived on site, they were just about to start the last field so I unpacked quickly and started filming. This time the weather was much brighter, with the sun being full for most of the time. I actually ran all three batteries down completely - including the quad doing an emergency landing when called home at the end of battery three. No damage, just a brief hunt to see where it had landed.

I think I'm beginning to get the hang of the controls by the end. Because the field is on a slope - steep enough for the tractor to get stuck at the bottom when loaded - at times I'm doing all four directions on the controller at the same time. This means having to think about, for example, flying forward, up, moving left and rotating right, all at the same time. It's still a bit jerky and wobbly, but that's what cheap quads are like. I'm still not doing this enough to splash on a quad with a stabilized camera - well not just yet.

Thanks must go to the farmers and contractors for letting me film, managing to ignore the quad as it buzzed around them.
Posted by David Kinrade at 6:32 am
Email ThisBlogThis!Share to TwitterShare to FacebookShare to Pinterest

Russell and I went out with the professional quadcopter this morning, to have a bit of a practice and get used to the camera and the settings. We got a couple of nice photos of the harbour and the swing bridge, but it needs a bit more practice before we'll be happy I think.

Afterwards, I sent my quad up for a quick flight from the promenade. Here's the result. It was a bit windy by this time, so the quad is always on an angle to fight against the breeze. I will just have to get a quad with a gimballed camera!

Here's a sample of one of the photos we took with the bigger drone. They look pretty good, but we do need to practice more.

Posted by David Kinrade at 11:47 am
Email ThisBlogThis!Share to TwitterShare to FacebookShare to Pinterest
Newer Posts Older Posts Home
Subscribe to: Posts (Atom)