The Passage of Time

When I left school at 18, I didn't want (and couldn't afford) to go to university and honestly had no idea what I wanted to do. I spent two years on the dole - along with thousands of others during the Thatcher era and was glad to get a job working for the MOD right here in Jurby. It meant I could walk to work - which was great as I didn't want to learn to drive at the time - that soon changed and I enjoy driving now very much.

I never settled in any job really, and I'm delighted that I now work for myself and can write my own agenda. I like the freedom to decide to do nothing - I know I don't take advantage of it - but the freedom to do so is still there. I like the freedom to just say YES when Fred and Elizabeth say "Are you coming to Africa for a month?" And, yes, that means I must make a positive response to the email I just received😎

I think I love that my work is so varied. I'm just the IT guy! Well, not really. Taking time last year to build a gunroom for someone made a refreshing change and reminded me that I'd helped my friends building an extension and a workshop - as well as a massive stone garden wall - when I was much younger and fitter than I am now. I now spend my time doing the usual PC repairs and support, but also many hours each week doing CAD, 3-D printing and CNC machining - something for which I have no qualifications whatsoever - just like everything else I do!

It's all computer-controlled these days and one drawing program is much like another and the ability to program apparently can be easily extended to cover everything from computers to micro-controllers and even CNC machines. I never was any good a languages at school, but then we didn't really do C, Python, HTML, JavaScript or CSS. They are all both easier and harder than French or German!

The Passage of Life

I come from a time not just of economic hardship, but one so different from now in so many different ways. I'm naturally shy and anxious by nature. I'm quick to blame myself and equally quick to bounce back - most of the time anyway. If I was pretending to be an analyst, I'm a bit of a manic depressive with fairly severe agoraphobia and a tendency to repress my feelings. I'm actually not too bad with the open spaces bit, it's the crowds, public spaces, new places and new situations that have all been known to bring on a full-scale panic attack. You learn to cope, you train yourself to get better at it and you get by!

I think it makes me tend towards a low profile. I'm not putting myself out there - I'm the one sitting at home behind the keyboard after all - and I don't want to rock the boat or even raise by head above the gunwales.

So, another week later and Heartstopper is still in my thoughts. Like many people of my age, apparently, I have enjoyed such an uplifting and thought provoking show. Many of the thoughts and feelings, however, have been - to say the least - mixed. I can see so much of myself in the amalgamation of Nick and Charlie that it truly can be painful to watch at times. Such fine acting from the two young leads really makes it feel so real, but raw too.

As I mentioned in my previous post, I came of age in a time very different from today. Public perception and even the laws governing our behaviour were very different than they are now and that is one of the most profoundly uplifting things about being Manx. It may have taken far too long, but the Isle of Man appears to have embraced equality and diversity pretty well - and certainly much better than many other places.

Because I've always kept to myself, finding any sort of romantic connection was always going to be difficult. I'm not going to do the pubs and clubs thing and I'm probably not going to start a conversation even if I am in a social situation!

I didn't kiss someone romantically until I was 38 years old - and yes, that's more than 20 years later than it should have been. That that person was a man didn't come as a complete surprise to me, but I knew right away that it was me being myself at last. It took me more than ten more years to come to terms with it and be able to admit it to other people, but better late than never. So I find I can relate to Nick's confusion and Charlie's anxiety pretty much in equal measure and it is probably that, above all, that makes a show like this resonate so deeply.

Do I regret that my journey has been such a slow one? Well, possibly. I do accept however that it has been the only journey I could have made and the pace of change is my own. I've been out for a few years now and the response from friends and customers has been the expected mix of surprise, affirmation and overall acceptance. I should have done it years ago - except I simply couldn't!

So, why the change of Facebook profile picture to include a rainbow flag? Well, why not? I guess I just need to affirm who I am to myself and there isn't any need for an explanation but you get one for free anyway. I've never felt the need to be a part of the Pride movement - I just get on with my life, but I'm comfortable and happy to say that I'm Gay and there's certainly no shame in that.

If you haven't seen it already, try and watch Heartstopper - romance is romance whatever the orientation of the couple and you'll thank me for it later! 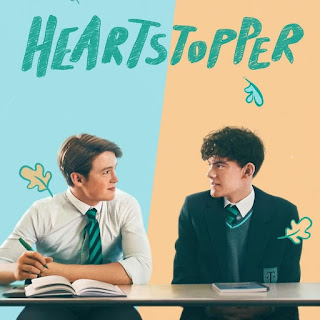